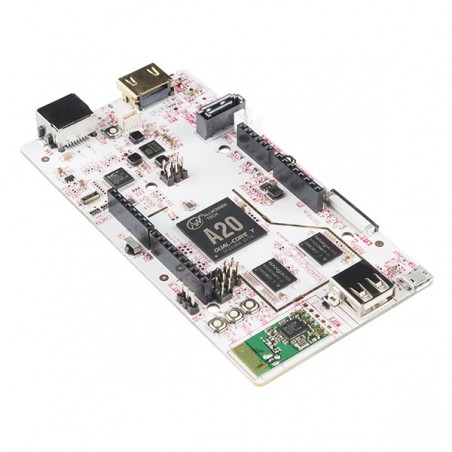 The pcDuino3 is a high performance, cost effective mini PC platform that runs full-featured operating systems such as Ubuntu and Android. In addition to running Linux and Android, the pcDuino3 has support for programming languages such as C, C++, Java, Python, Arduino, and more. You can even use your favorite Arduino shields for added hardware capability. The pcDuino3 has an impressive set of features including an IR receiver, SATA host, USB-OTG, LVDS LCD interface, MIPI camera interface, 3.5mm audio output, battery header, WiFi, Ethernet, and more. If you’re looking for the ‘kitchen sink’ of development boards, look no further.

The pcDuino acts much like a computer, needing only a 5v (2A) power supply, keyboard, mouse and display to get running. You can even use the USB-OTG to connect remotely. Connect it to your network with either the WiFi module or Ethernet jack so you can log data, run a web server, or control devices remotely. The more powerful pcDuino uses a dual core A20 processor which makes it one of the most powerful single board computers on the market.

An API has been developed for the pcDuino3 that allows the user to access all of the functions that you would expect using simple Arduino-style language. Additionally Ubuntu and Android OS Images can be found in the Documents section below.