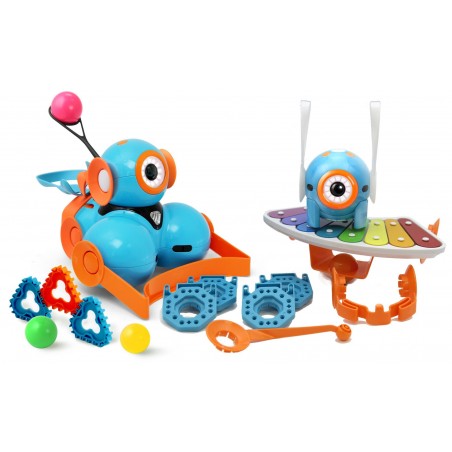 The Wonder Pack is a customer favorite. It comes with our award-winning Dash and Dot robots, as well as, six of our accessories. This exceptional value pack will spark creativity and encourage kids to use their imagination while helping them develop problem-solving skills.

1 - Accessories Pack for Dash and Dot

1 - Set of rabbit ears and tail

The Wonder Workshop Dash and Dot Robot Pack (Wonder Pack) are capable robots that can sense their environment and can be programmed wirelessly using a touch device. The Dash & Dot are designed to be fun at your home and in a child’s play room. The combination of sensors on these robots, the child friendly programming tools on touch devices, and the design of the robots makes it fun and easy for kids (and grown ups) to do several activities with robots that would have seemed impossible until now. They can move, glow, make sounds and interact with each other. This dynamic duo can do anything you set your mind to.

Dash
Dash has two drive wheels and a balance caster that enables it to drive forwards, backwards, spin, and move almost anyway. Dash’s head can move relative to the body, both pan and tilt, and the 12 LEDs in the eye can be programmed independently to create. You can customize Dash’s personality by changing the color of the side headlights, the eye animation and greetings. Dash’s IR sensors allow it to sense how far away an object is in front or behind it.

Dot
Dot’s eye can be programmed to different patterns, just like Dash’s. In addition, Dot’s eye can be programmed to take a color. Dot has an accelerometer that helps detect when Dot is moved, shaken, tilted, rotated, dropped, and so on. These gestures can be used to program any other robot (or even used in conjunction with other devices). Dot can be used as a remote control to guide Dash along.

What you need to play: 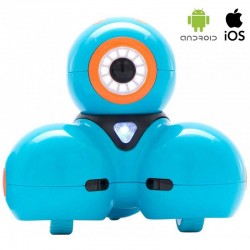 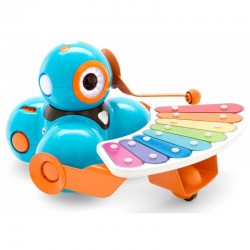 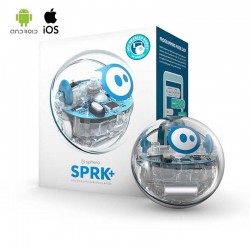